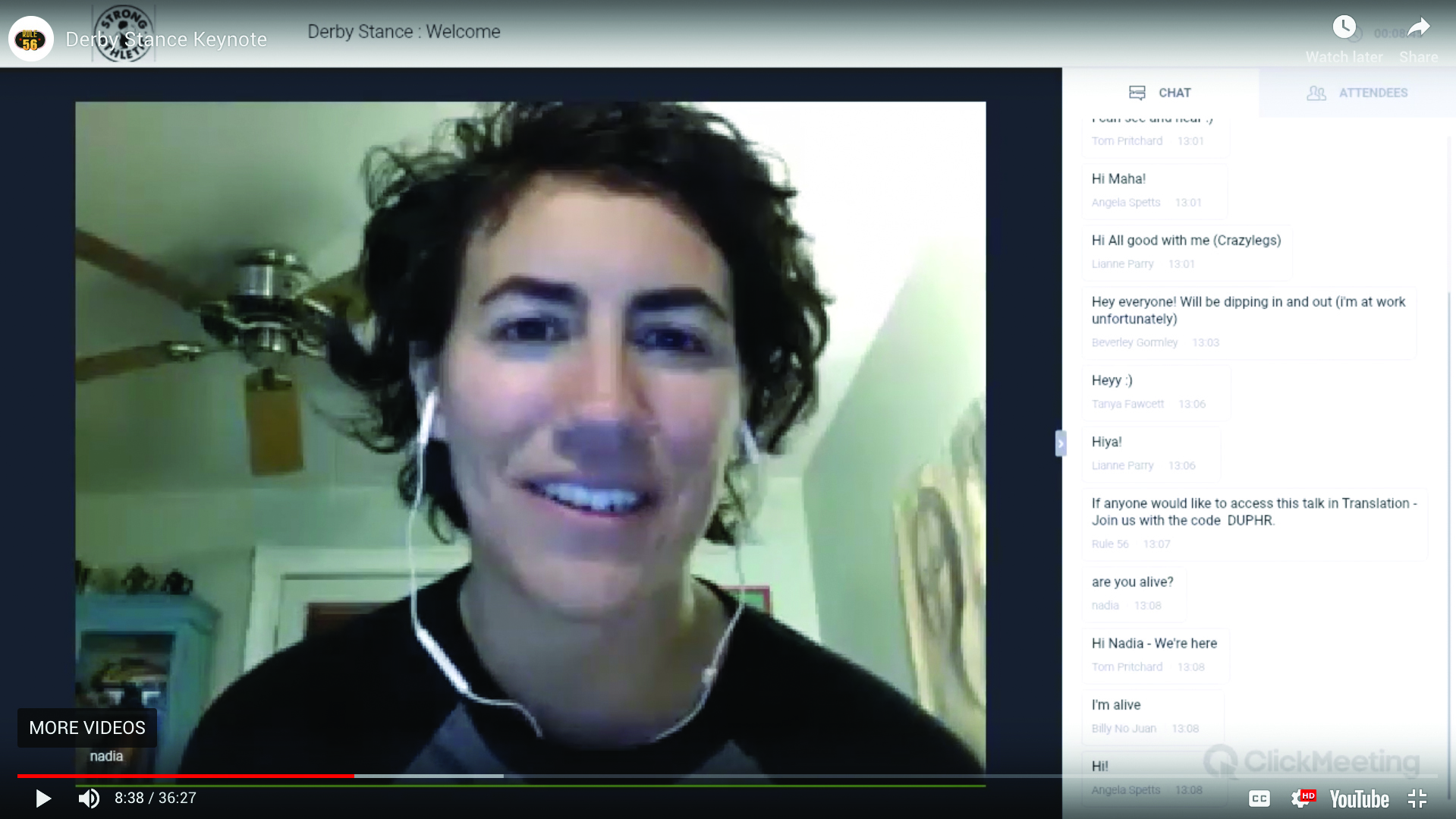 Back in 2016, Hydra and Ecky Thump of Rule 56 brought a coaching summit to Yorkshire, bringing coaches together from all over the world to talk coaching. More recently, in 2018, Rule 56 ran Derby Stance again, with a difference – this time it was all online.

According to Hydra of Rule 56, Derby Stance 2018 provided “an all-virtual space for coaches to come together, meet up, share stories, and learn from some of the best sport and roller derby coaching minds.”

This was a considerably different offer from the inaugural, in-person conference that took place in Leeds in 2016. The sessions took place over the course of 4 days, from 29 November to 2 December, in webinar format, for which attendees bought tickets. While the sessions were live, attendees could raise questions, speak to the presenter and engage with each other. Following the live broadcast, attendees could then access the content again later. This allowed for accessing a session that is impractical to attend in person – the biggest barrier was due to time differences, as the sessions were broadcast from presenters all over the world. Sessions ran with start times from 8am GMT (mostly for an antipodean audience) to midnight GMT (mostly for a US audience), and the programme included a handy-dan timetable that covered PST, EST, GMT, CET and AEDT for a global audience.

Derby Stance 2018 covered 5 basic themes: Just Start Coaching; Strategic Coaching; Mental Performance; Game Day; and Juniors. In keeping with the inaugural event, the key note and introductory speaker was Smarty Pants of Strong Athletic, which was also one of the key sponsors.

Just Start Coaching was the stream that had the most topics; presenters talked about a range of issues involved in setting out in coaching. The for skaters, by skaters approach in roller derby is at once its biggest strength and its biggest challenge, at least here in the UK where there is no recognised roller-derby-specific coaching qualification. Many coaches are thrown into the role because it needs to be done, not because they necessarily already have all the skills a coach needs to bring a team together, keep athletes at different levels motivated and remain accessible to people who may have found it difficult to engage in more traditional forms of sport. The stream included topics on the importance of getting the basic skills right, dealing with difficult behaviours, mental health in roller derby and new skater programmes.

The Strategic Coaching stream included strategy training for beginner and intermediate teams as well as situational coaching, which looked at preparing for specific games. It also included a topic on cross training and one on exploration versus repetition training, which talked about allowing teams to work out their own strengths and weaknesses and develop gameplay strategies around their unique style.

The Mental Performance strand was the second-most covered stream with topics on building mental resilience and mental strength, but also included an introduction to the mindfulness-acceptance-commitment approach (or MAC approach, for short), which is an alternative sports psychology approach based on cognitive-behavioural skills. The aim of the MAC approach is to improve performance and mental wellbeing in athletes, and is drawn from an empirically supported clinical method. Other topics included mental preparation for tournaments – as more WFTDA top teams squeeze their sanctioned games into a couple of weekends, the pressure to perform can be immense.

The Junior Derby strand included a topic on sports psychology for junior coaches, as well as one on developing a programme that is suitable for junior skaters.

The WFTDA also supported the conference with an open session hosted by the WFTDA education outreach officer, Catherine Beat-her Bonez. This was not a presentation, rather a facilitated discussion to identify what educational needs coaches and skaters have, with a view to improving the status quo for leagues across the world.

There were also fringe events happening on the Rule 56 Facebook page, including a session by Miss Tea Maven of Gotham. As well as additional broadcasts, the fringe events created and continued discussion on Facebook, with innovations like coaching chat, where Rule 56 would pair up coaches for a virtual coffee and chat, wherever the coaches were in the world.

The whole event was a massive undertaking by Rule 56, as presenters contributed to the conversation from Stockholm, Amsterdam, London, Edinburgh, Bradford W Yorkshire, Vancouver and Philadelphia, to name but a few. Participants attended from all the continents in the world with the sole exception of Antarctica, and I’m not sure what the take-up of roller derby is like on that continent! Timings had to be worked out months in advance, and all presenters needed some training in the webinar software and Microsoft Translate, which magical app translates speech in real time. Tech support volunteers were standing by to deal with internet-related issues, which were thankfully and surprisingly few, given how many I seem to deal with daily in my life and work.

Overall, the event was fun, educational and undoubtedly beneficial as it achieved the mission statement of Rule 56, Let’s Keep Talking About Coaching. The best thing is, you can still purchase access to the webinars – go to RuleFiftySix.com to find out more.

This website uses cookies to improve your experience while you navigate through the website. Out of these cookies, the cookies that are categorized as necessary are stored on your browser as they are essential for the working of basic functionalities of the website. We also use third-party cookies that help us analyze and understand how you use this website. These cookies will be stored in your browser only with your consent. You also have the option to opt-out of these cookies. But opting out of some of these cookies may have an effect on your browsing experience.
Necessary Always Enabled
Necessary cookies are absolutely essential for the website to function properly. This category only includes cookies that ensures basic functionalities and security features of the website. These cookies do not store any personal information.
Non-necessary
Any cookies that may not be particularly necessary for the website to function and is used specifically to collect user personal data via analytics, ads, other embedded contents are termed as non-necessary cookies. It is mandatory to procure user consent prior to running these cookies on your website.
SAVE & ACCEPT